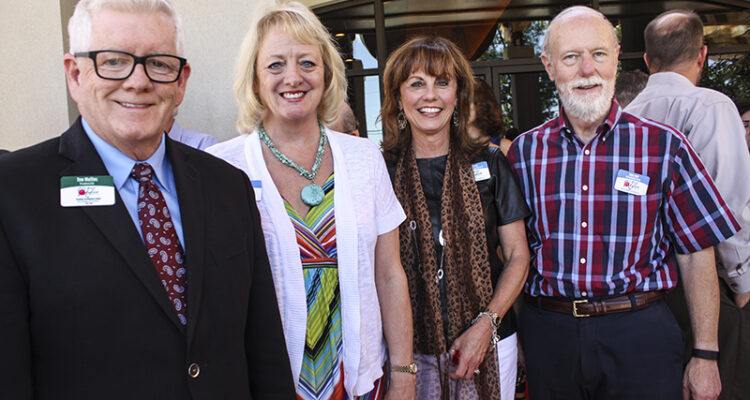 Tom Mullins: Destined to Develop the Economy by Robert Marlin

From the moment Tom Mullins arrived in Tyler thirty-one
years ago to assume the position of President and CEO of
the Tyler Economic Development Council, it was obvious
to everyone involved with city leadership that a new wind had
blown into town. Not a whirlwind, haphazardly scattering
everything in its path in a thousand different directions. It was
more of a straight-line wind roaring forward, focusing its energy
in one direction, never deviating. Unlike the destructive aspects of
a storm-borne wind, Tom’s energy was concentrated on a singular,
positive goal: help Tyler grow by diversifying its economic base.

In the winter of 1989, Tyler was in the throes of a recession
brought about by the oil bust of the mid-80s. Prices began falling
in 1978 and continued a steady decline, with crude oil bottoming
out at $9.85 per-barrel in July 1986. Since the oil boom of the
1930s, Tyler’s rosy economy depended on the oil industry as its
primary financial driver. As the effects of the oil bust dragged
on throughout the 80s, city leaders began to consider what
their options were. An eight-member committee was formed
to determine a solution. The committee was comprised of two
factions: the old guard who believed the situation was part of
the normal ebb and flow of the oil industry, which would right
itself if given time; and a contingent of younger, more aggressive
citizens who wanted change, who saw a need for more diversity
in Tyler’s economic base.

The committee’s first action was to hire Dr. Ray Perryman to
conduct an economic outlook study that projected anticipated
growth over the following five to ten years. The next step taken
by the committee was to engage Fantus Consulting in Chicago
to design a five-year economic development strategy and budget
that would require a full-time professional to implement. That
led to hiring an executive search firm, New York-based Ward
Howell International, Inc., tasked to recruit the right leader to
turn the strategy into a reality.

“In mid-December 1988, I received a call from Lincoln Eldredge
who identified himself as a recruiter with the search firm’s
office in Dallas, Texas,” Tom recalls. “Without identifying the
specific location, he asked if I would be interested in a job in the
Sun Belt. I looked out the window and saw a Canadian goose
landing on an ice-covered pond. I replied, ‘You’ve caught me at
a weak moment.’”

The recruiter said the job was in Texas. “Having been to Dallas
once, my impression had been it was flat and dusty, the typical
West Texas image from the movies. My immediate reaction
was ‘No, thank you.’ Eldredge was persistent, and I agreed to
go to Tyler for an interview in January. My first look at Tyler
was a cold, rainy day. I had to warm up to the idea of Texas,
but I noticed that the eastern part of Texas looked a lot like
Minnesota, not at all the flat, treeless terrain I imagined.”

The search committee Tom met with was chaired by the late
A.W. “Dub” Riter, Jr., head of one of Tyler’s leading banks. Dr.
Ray Hawkins, President of Tyler Junior College was also on the
committee. One of the committee’s leading voices favoring
diversification and change was City Manager, the late Gary
Guinn. Tom remembers, “I came prepared with a specific
strategy detailing what I considered the best approach for
getting the city out of the quagmire it was in—because of its
dependence on a single economic driver—which of course
was the energy sector. At that time, mortgage foreclosures
had reached crisis stage, unemployment was high, and people
were forced to leave Tyler. I suggested the need for diversifying
the economy; the idea that no city should be dependent on a
single economic driver.”

Tom was soon the top candidate for the position. “I always
believed there were two things that got me the offer: I had the
credentials, a master’s degree in regional development; and I
had the experience of three successful Minnesota startups in
Duluth, Grand Rapids and Rochester,” says Tom. In March,
Tom brought his wife Sharon to Tyler. It was seventy-five
degrees and the azaleas were in bloom. “We picked up a USA
Today and noticed that a blizzard was going through Rochester
that day. That sealed the deal. At the time, our daughter Erin
was eleven and our son Sam was a year old. We both agreed that
Tyler would be a great place to raise our children. We thought
Tyler could give us the quality of life we wanted for our family,
coincidentally the same reasons I have been using with business
prospects of the TEDC for the past thirty-one years!”

Tom moved his family to Tyler in June 1989, and the
community began to feel the wind pick up. Tom began filling
the pipeline with business prospects to pitch on the advantages
of locating to Tyler. His approach was methodical; his pace
was steady and constant; his passion was relentless.

At the recent annual meeting of the Tyler Area Chamber of
Commerce, Sharon was the first person Tom thanked from
the podium. “She is the one who said we should try this,
and it would not have happened without her support and
encouragement.” As he continued his remarks, Tom also
acknowledged the talented staff at the TEDC, The Chamber and
Visit Tyler. Finally, he acknowledged the support he received
from community leadership, “When we began the work, the
business community was the first to support the direction we
were heading. Later, a large part of the community embraced
the changes we instigated.”

Reflecting on what his legacy to the city might be, Tom said two
things come immediately to mind: a more diverse economy
that will aid in future growth; and the TEDC’s strong structure
that will continue long into the future. “Perhaps a third is the
reputation Tyler now has as a community that is pro-growth.”

Tom is still blowing, no longer a gale force, but strong and
steady. He has formed a consulting group, T.G. Mullins
Consulting LLC. His first contract is a two-month project to
help Scott Martinez get networked and situated in Tyler as he
takes over the position Tom is leaving. “Already, Scott is working
on four promising projects that have Tyler is on their short
list: Two Fortune 100 distribution center projects, a Fortune
500 computer tech company and an electronics equipment
manufacturer. Combined, they will create just over 2,000 new
jobs and will further diversify the economic base,” Tom says
with no hint of slowing down. “I have signed a contract with UT
Health East Texas to work on regional projects over a twelvemonth period and I am in discussion with two other major
development projects that will impact the region. I have a few
other consulting prospects in my pipeline.”

Apparently, when the wind is blowing, retirement does not
mean stopping work. Just slowing down. Although, slowing
down may not be accurate either. “I can’t stop. I have to be busy.
I just won’t be as busy because I can set my own schedule,” Tom
rationalizes. “I came here thirty-one years when the area was in
a recession caused by the oil bust. Now, I’m leaving in the midst
of another recession due to a global pandemic. It’s like Sandburg
wrote, ‘I have promises to keep. And miles to go before I sleep.
And miles to go before I sleep.’” 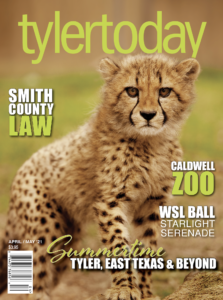