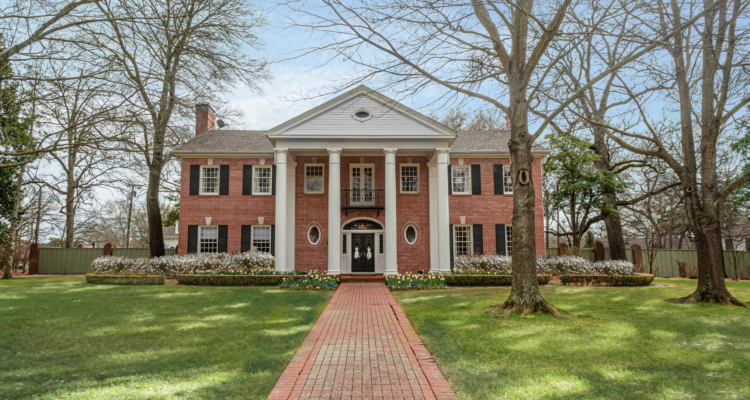 Historic Tyler on Tour is scheduled for May 21st-23rd. The annual Candlelight Party on Friday evening will showcase the historic Upchurch-Clark-Daniels home in the heart of the Azalea District. Drs. Delaine and Bill Daniels graciously agreed to host this year’s party in their home because of their high regard for history. “When Bill was completing his residency, we lived in Nashville, Tennessee, where one of our favorite pastimes was driving around looking at the beautiful historic homes. I always wanted to live in such a home,” Delaine says. The Daniels are originally from Gilmer in Upshur County. “Bill’s granddad was my childhood dentist. Every time I went to an appointment he would ask, ’Do you know my grandson?’” They finally met when both attended Harmony High School, becoming high school sweethearts. They married in 1998, after Delaine had finished her dental training at Baylor College of Dentistry in Dallas and Bill had finished medical school at UTMB Houston.

What first attracted the Daniels to this home when they bought it thirteen years ago was its yard and the landscaping. The lot has several large, established trees and dozens of azalea bushes. The Colonial Revival architectural style was another major attraction. “This house reminded us very much of the Southern mansions we have seen on our travels,” says Delaine. Situated on nearly an acre of land, the house itself has approximately 5,200 square feet of space. Upstairs, there are three bedrooms, three full baths and a spacious family room. Downstairs is designed for entertaining with a kitchen, a formal dining room, a great room, a study and a powder room. A detached garage also includes a mother-in-law suite upstairs, which the Daniels use primarily for storage. The home was designed by Dallas architects Thompson and Perry and built in 1935 for the original owner, Mrs. Claude. E. Upchurch, who lived in the home until her death in 1977.

As was the fashion with so many Colonial Revival homes, the entry hall is dominated by a sweeping staircase that curves majestically upward. This staircase includes a hand-carved banister. “When we did the remodeling, we had the carpet removed from the stairs to show off the natural wood. The house had natural wood floors throughout originally, most covered in carpet, which we had removed,” Delaine says. J.W. “Chad” Hanna, with Chad Hanna Homes, took charge of the minimal remodeling the Daniels had done prior to moving in after closing their purchase in the summer of 2006. “We wanted the home to be more comfortable for our daily living but without losing its original charm or its historic significance,” Delaine explains.

The suggestion to modernize the home by removing the arched doorways was rejected. “The shape of the doors and the matching archways create the flow from one room into another,” says Delaine. “The main floor of the home was built for formal entertaining. The architectural style is very reminiscent of the antebellum homes throughout the Southern United States.

“I relied on Andrea Pool Design of Longview, for furnishing and decorating the formal dining room. Meghan Hernandez, with Olive and Home of Tyler, did the study downstairs and the upstairs family room. They both have wonderful taste and an eye for detail.”

As with many of the older homes in the Azalea District, the dining room originally had a floor buzzer for calling the kitchen. Today, the dining room is dominated by an antique table and custom-made chairs. The swinging door entrance to the kitchen was maintained, as were the niches that display family mementos.

One of the major efforts for Hanna was enlarging and modernizing the kitchen. “The original kitchen was very small, and we wanted more space,” Delaine says. The butler’s pantry includes a place for displaying Bill and Delaine’s own crystal collection as well as that of Bill’s grandmother.

After buying the house, Delaine received a copy of a letter that was written by Mattie’s niece Jean, a frequent houseguest when the Upchurch children were growing up. In the letter, she references attending her cousin Josephine’s wedding, and of reading the inscription Mattie wrote to her daughter in the wedding memory book, “You were the sunshine in a house filled with sorrow.”

Mattie Grace Thomas was born in Bienville Parrish, Louisiana, in 1894. She met her third cousin, Claude Upchurch, when she attended a wedding in his hometown of Corsicana. The two fell in love and married. They had five children, tragically losing two in infancy. He was an attorney and moved to Tyler with his wife Mattie and their three surviving children when he began investing in oil wells. In 1931, as Claude was inspecting one of his wells in Kilgore, it exploded. Claude’s leg was broken, and he was badly burned. A week later, Claude died from his injuries. Left with an income from her husband’s oil investments, Mattie had the house built. She had it modeled after her sister Ethel’s house in Arcadia, Louisiana.

Bill has a large collection of vinyl records and engaged Stereo and Video Center to install an analog sound system in the family room to go along with the state-of-the-art sound system. The electronics for this system are kept in a separate closet designed just for that purpose.

Recessed lighting was added to the coffered ceiling, which has velvet inserts that complement the gold, velvet sectional sofa and the wall-to-wall velvet drapes.

All of the carpet was removed from the guest bedroom and their son Jackson’s bedroom. The rug in the guest room came from the Riter estate sale. The collection of medals and patches displayed in the guest room were awarded to Bill’s grandfather for his service as a medic in the 3rd Marine Division during World War II.

Jackson’s room has a loft bed ideal for video gaming, something so many teenaged boys are interested in these days. His room is the most original of all the rooms in the house.

Jackson’s bathroom is 100% original, with its original tile and plumbing fixtures.

The master bedroom was reconfigured to increase the amount of storage space available. The room is dominated by the bed, flanked on either side with mid-century modern side tables from Details.

The master bath was modernized for comfort and luxury. The painting hanging in the master bath was purchased from the A. W. Riter estate. “We love finding treasures from estate sales. It is especially pleasing to find items that fit within the style of our historic home.”

“The yard was one of the things we fell in love with when we first looked at this property. There are not many yards this size in the Azalea District. Bill studied the art of barbecuing, and we installed a smoker from East Texas Smoker Company just outside of the kitchen,” Delaine explains. This area of the yard features string lights and a grouping of teakwood plantation chairs for relaxing outside.

Another addition to the back yard is the swimming pool built by Blue Haven Pools. The pool is the focal point of the yard. “The landscaping in the backyard has been in place for generations. It has mature azaleas and roses that are spectacular every spring,” says Delaine. Unfortunately, the once-in-a-century snowstorm this winter took a toll on the landscaping, and it will be next year before the backyard regains its natural beauty!

Make plans to attend Historic Tyler on Tour 2021, including the Candlelight Party and Home Tour, showcasing the home of Delaine and Bill Daniels on Friday, May 21st. For ticket and event information, visit www.historictyler.org or call 903-595-1960. 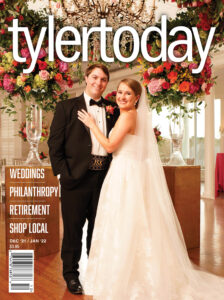