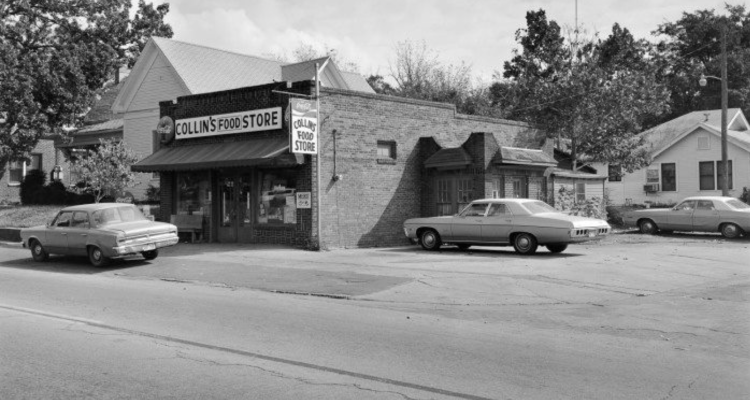 1313 East Erwin Street – The Heart of the Neighborhood

In the days before supermarkets, many neighborhoods were anchored by the corner grocery store. In Tyler, just such a store was Collins Grocery located at 1313 East Erwin on the corner of South Horace. It was opened in 1926 by James Potter Collins, Sr., and his wife Camilla. He had the house on the corner moved to the lot just to the east and built the red brick building that housed the grocery next door on the corner lot. The store provided fresh produce and other grocery items to the residents of the neighborhood. Not long after opening, a meat market was added. It was one of the first stores to have a walk-in cooler for storing fresh sides of meat.

The Collins’ had four children, two boys and two girls (Jimmy, Bryan, Ruth and Zonetta). Their eldest daughter, Ruth, graduated from high school the same year the store opened. In the early years of the store, it was run by family members and a young man named Kara Hutton. One of Ruth’s first responsibilities was to visit the Farmer’s Market in the Wagon Yard at the eastern edge of downtown Tyler to buy fresh, in-season vegetables. Throughout the days of the depression, her mother Camilla would telephone regular customers daily to let them know what fresh produce was available.

It was also during the depression that James Sr., made a deal to trade his allotment of rice to the Mexican food restaurant down the street, owned by Luis Diaz, and later by Gilberto Ramirez, who changed the name to Gilbert’s El Charro. This was just one example of how Collins Grocery took a leading role in the life and welfare of the neighborhood. James Sr. was also an innovator in the way a grocery store was operated. He introduced the concept of self-service to the marketplace by placing wooden baskets near the entrance of the store. This allowed shoppers to gather items off the shelves for themselves.

Ruth Collins married Elliott Barrett on March 17, 1940. The previous September, James Sr. fell ill and died on the 18th, at the age of seventy-five. Ruth and Camilla took over running the store, until July 1944, when Ruth’s brother, James P. Collins, Jr., came home from West Texas where he had been a sales rep for Swift and Company. In August 1944, Ruth and Elliott welcomed a daughter, Jane, to their family.

Uncle Jimmy, as he became known to all the customers, took over running the store. When competition from larger chain stores, like Brookshire’s, began selling their products for less than Uncle Jimmy could buy them wholesale, he began making sandwiches. A new side to his grocery business was born. His signature sandwich was simple, freshly baked ham with Kraft sandwich spread on toasted bread, wrapped in butcher paper, and served with a soda and potato chips. It was an immediate hit with the neighborhood, and eventually attracted people from downtown who were looking for a quick lunch break. Linda Rudd, owner of Dakotas Restaurant in Tyler, grew up in the neighborhood and has fond memories. “I lived around the corner on Elm,” Linda recalls. “We would skate or ride our bikes there for a snack after school. I’d put peanuts in my coke! I can remember sitting in big chairs visiting with Ruth and Uncle Jimmy. They were wonderful people and that store was the central meeting place of our neighborhood.”

The death of his sister Ruth in February 1995, and his own failing health, precipitated Uncle Jimmy’s decision to sell the business, along with the house that had been Ruth’s home, the duplex apartment next door and a white frame house located behind the restaurant. By this time, little Jane had grown up and was married to Hayden Moore. They had two children, Jennifer and Cleve. Their daughter, Jennifer Gaston, is now the Editor-in-Chief of TYLER TODAY Magazine.

Prisca and Juan Barron emigrated to Tyler from Guanajuato, Mexico, in search of fulfilling the American Dream. Prisca’s dream was to one day own a restaurant. After arriving in Tyler, the couple began traveling to the local soccer fields with a concession trailer, selling homemade tacos. The Barrons heard about the opportunity to buy the Collins Grocery and were convinced doing so could make their dream come true. The problem was, they had no credit.

It was Hayden Moore who came to their rescue. He negotiated a price with the Barrons and offered to carry the note personally. The Barrons began the process of remodeling, turning the grocery store into a restaurant. Don Juan Mexican Restaurant opened for business on April 10, 1997. During the remodeling process, the tin ceiling was removed and put into storage. Several years later, the Barrons were offered more for the old ceiling than they paid for the store. It remains in storage to this day.

“Originally, there were just ten items on the menu, which was intended to attract the local Hispanic population,” says Angel Alfaro, the Barron’s son-in-law, who along with his wife Juanita, manage the restaurant on the Barron’s behalf. “Little did we know at the time that we had hit the jackpot! The restaurant was an immediate success, attracting not only the local Hispanics but other customers from the neighborhood who had previously been customers of Collins Grocery. Within two years, we bought the land across the street for a parking lot to accommodate the number of customers who were dining in the restaurant.”

The Barrons paid off the debt early, never missing a payment. “The credit for Prisca to achieve her dream goes to Hayden Moore. Without his help, none of this could have happened. He and Jane are loyal customers and great friends,” said Angel.

By 2000, the success of the original location warranted opening another location on the square in downtown Tyler. A few years later, Mariscos DJs Don Juan Seafood was opened, offering a selection of seafood entrées to the neighborhood. “Twenty-five years later, we have three locations and 102 employees,” says Angel. “The key to success is taking care of the customers, serving a quality product, and giving every customer good service, with a smile!”

Juan and Prisca are still involved, visiting the three restaurants every day to ensure the quality standards are met and maintaining their personal touch in each location. Their success has allowed them to invest in the neighborhood, providing not merely jobs for the local residents, but also housing opportunities. Fulfilling Prisca’s dream has helped to keep the neighborhood vital and alive. 1313 East Erwin remains, as it has been for more than ninety years—the heart of the neighborhood. 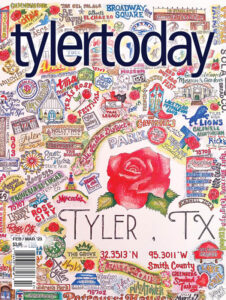