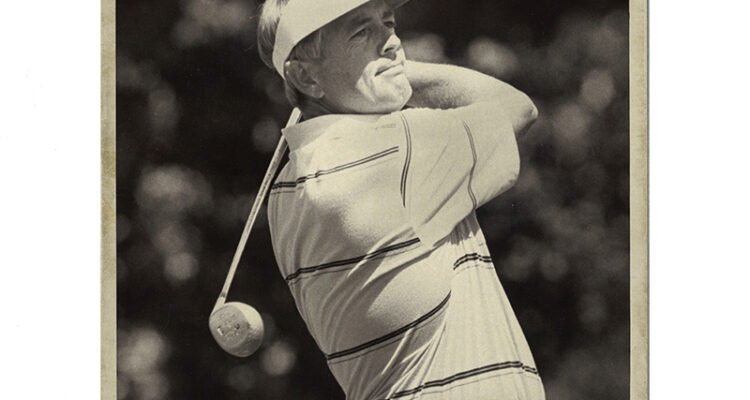 One of the best places to relax and share golf stories is
the handsome and august 19th Hole at Willow Brook
Country Club. The room’s dark wood decor is elegant
and adorned with plaques chronicling the golfing history of
an East Texas country club approaching its centennial in 2022.
Take a closer look at those plaques honoring former club
champions and you will find the name Andy Wall engraved on
fifteen different occasions from 1974 until 2005. Do the math,
that’s fifteen club titles in a thirty-one-year span.

Wall’s amateur achievements exceeded those club
championships when he won the 2004 Texas Senior
Championship at Tapatio Springs near San Antonio. He won
that coveted title at age sixty-four, beating top amateurs from
around the state, who were sometimes nine years his junior
since the event is limited to those fifty-five and older. Now
eighty, Wall has stayed fit and trim through the years and will
be honored with a special dinner Sunday, May 7th at Willow
Brook Country Club on the eve of the 2020 Legends for Life
golf tournament benefiting the Fit Steps for Life.

Wall’s keen physical condition has proven beneficial to him
since being diagnosed with Parkinson’s disease five years
ago. Yet, he still deals with nagging injuries like a balky lower
back, and on this day, he was relaxing at home and reading a
golf magazine. “I was fortunate to have been diagnosed with
Parkinson’s later in life as opposed to Dr. Pat Thomas who was
hit by it at age fifty-three,” Wall said. “And I have a great doctor,
George Plotkin, who has always recommended exercise, eating
lots of fruit and playing as much golf as I can.”

Dr. Thomas was an active member at Willow Brook who
passed away in 2019. Dr. Thomas loved his golf and spoke for
many golfers when he once said, “It isn’t the game of golf that I
love so much but the people who play it.”

My first memory of meeting Andy Wall was during one of
those famed Briarwood Invitationals during the early 1970s.
Later I went to see him for my first car loan at Southside Bank.
Most of us remember our first car loan and mine was for a 1973
Mercury Montego, a shiny green machine with thin racing
stripes and “three on the tree!”

Later, Wall would vouch for me as a reference for a mortgage
insurance job that I secured and enjoyed for twenty-five years
in Texas and in Georgia. His wife Diane was my speech teacher
at Hogg Junior High “back in the day.”

When you think about Wall’s golf and his accomplishments, it
is good to keep in mind what it means to play amateur golf at a
high level. Most play at that level and beyond because they have
a passion for competition and a love for the game. They compete
while holding down a job, which Wall did for some thirty-five
years as a loan officer and executive at Southside Bank.

Wall learned to play while growing up in Dallas and continued
improving while at the University of North Texas. Arriving in
East Texas, Wall played first at Hilltop Country Club in Troup
before moving to Briarwood and then to Willow Brook. He
also belonged to Hollytree Country Club for a stretch of time
and won six club championships there to complement those
won at Willow Brook. “I couldn’t afford Willow Brook when
I first moved here in 1965,” Wall said. “I was with GM and
my wife Diane was teaching, so I joined Hilltop and started
playing there because it’s a good nine-hole course with a lot of
history.” Wall was referring to the Hilltop Invitational that has
been a Labor Day weekend tradition since the late 1940s.

It was A.J. Triggs who talked Wall into joining Willow Brook.
Wall often paired with Triggs in partnership tournaments and
said he still misses him. “A.J. talked to me about joining and
always called me ‘Drewsky,’” Wall said. “He said, ‘Drewsky,
you need to get over here at Willow Brook with us.’ I still
miss him greatly because I learned so much from him and
he was so much fun to be with, on and off the course.”

In 1968, Wall began his career at Southside Bank and raised
a family before retiring in 2005. With his two children
grown, and the support of his wife, Wall began to work on
his game seriously, which helped him excel in the senior
amateur events. He played in six USGA Senior Amateurs
throughout the country at some of the finest courses in
America. He made great friends with other gifted golfers
doing the same, like Mike Rice of Houston, who won the
USGA Senior Amateur in 2005. “I have a wonderful wife
who allowed me to hit balls almost every day after work,”
Wall said. “It had two benefits: it helped me unwind from
the day at the office, and it helped me improve my ball
striking and short game.”

“The thing about Andy,” good friend and fellow Willow
Brook competitor Don Robert Johnson said, “is that he
works hard on his short game and it shows. He is one of the
best chippers at our club and that means he does not waste
many, if any, shots around the greens.”

It’s hard to believe that it was more than four years ago
when I ventured out to Las Colinas Country Club in Irving
to see Wall tee it up in the Legends division of the Texas Golf
Association Super Senior Championship. The tournament is
limited to those sixty-five years old and up, with the Legends
division set up for those seventy and older, which applied to
Wall on this damp, early spring morning.

Mindful of those youthful days when he was winning the club
tournaments at Willow Brook, Wall smoothly swatted his drive
down the middle. His flair was unchanged from those earlier
days as a smile creased his face knowing his ball was safely in
the fairway some two-hundred-thirty or so yards away.
Wall’s smile that day reminded me of one of my favorite sayings
in golf. It is attributed to the great Walter Hagen. Nicknamed
“The Haig,” Hagen was an unflappable player who won four
straight PGA Championships during the 1920s, the final one
at Dallas’ Cedar Crest in 1927. A marvelous competitor, Hagen
overcame some sketchy ball striking with a will to win and
paved the way for acceptance of his fellow pro golfers during
an elitist era of sports when pros were looked down upon by
society. “Sometimes, you just gotta keep swinging,” Hagen said.

And that’s just what Wall continues to do, with a flair all his own.