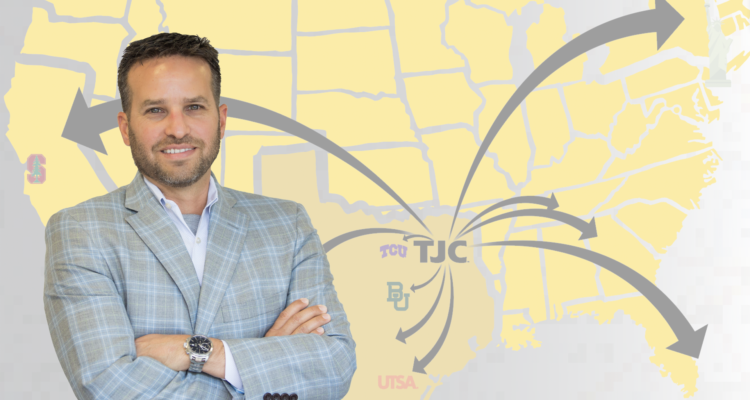 TJC: On the Road to Success

by Alex Leroux and Rebecca Sanders

There is something special about TJC students. Whether it is their unique talent, keen business sense, focused determination or an exceptional ability that makes them successful, TJC alumni can be found throughout East Texas as well as in various parts of the world. Our students are proving every day that with the education and training gained at TJC, their hard work and passion can truly take them from TJC to anywhere.

FROM TJC TO COMPANY PRESIDENT

As a high school senior in Sinton, Texas, the main thing Roy Martinez knew about college was that he was going to go to one. He had no idea where and didn’t know how, because funds were tight with an older sister just finishing her degree at Sam Houston State University.

Martinez originally came to TJC in hopes of playing on the baseball team, but a torn ACL sidelined him before he could even begin. Although baseball was out of the picture, Martinez enjoyed his classes and found his professors had interesting experiences to share, so he decided to continue his TJC education. He knew he needed a job to pay for school and living expenses, and a friend from church suggested he apply for a teller job at Southside Bank. Previous high school jobs had provided him the basic skills he needed, and without a car, Martinez was happy to have a job within walking distance of the College. As he worked full time and attended classes, Martinez became more interested in the banking industry. “I didn’t choose it as a career,” he said. “I just chose it as a job, and it turned into a career.”

Martinez continued his education, transferring to UT Tyler to earn his bachelor’s degree and later his MBA. “I was so grateful that I could go right from TJC into the next phase; that was helpful.”

He spent the next 20 years in banking, working in various roles including collections, credit analysis, consumer lending and commercial lending. It was during this time that he met Winston Jones, the majority owner of Swan Transportation Services, a full-service freight brokerage company. Martinez and Jones often talked about business strategies, and Jones repeatedly offered him a job. “I kept saying no. Finally, I guess hitting 20 years in banking, I thought maybe it is time for something different.”

Martinez had only been at Swan for a year when Jones unexpectedly passed away, and the remaining partners asked him to run the business. “We’ve got good people here who supported that and so we’ve grown. We actually doubled in size over the next few years, which was great.”

Although Martinez had little spare time while working and attending college, his experience at TJC afforded him many opportunities. “For me, I came from a really small town, but moving here to Tyler opened my eyes a lot. I didn’t get involved with a whole lot early on primarily because I was working a lot, but seeing it did expose me to people who have interests in different things, and that was very unique to me.”

“The professors and the teachers at TJC all had a different background. I actually was very interested in that because I wanted to know,

‘What was your path to get to what you’re doing?’ And they weren’t just people locally; they came from across the globe. They have different walks of life and they bring different experiences to incorporate in the classroom.

That was always fascinating to me.”

Martinez also found that professors cared and wanted to help ensure he could continue his education. He remembers a time that he was called to the office of Dr. Bill Crowe, former president of TJC. “He was talking, just wanting to know a little bit about my background and such, and then he says, ‘Hey, I’ve got something for you,’ and it was a thousand-dollar scholarship that was provided to me by the Faulconer Foundation.”

Martinez knew it was made possible by a co-worker who “put a bug in someone’s ear” about his financial need. “And that was a huge help financially,” he said. “I couldn’t tell you how big of a cornerstone that was, just to get started and without even knowing the people. I’m grateful to the Faulconers, I’m grateful to TJC, and grateful to those who thought enough of me to put my name in the hat.”

As president and CEO of Swan Transportation, Martinez oversees offices throughout the United States. When out-of-town clients or employees from other offices visit the company’s headquarters in Tyler, he is happy to give them a tour of the Rose City, which always includes a drive down Fifth Street and the main campus of TJC.

“I don’t see it watered down,” Martinez said as he reflected on his community college education at TJC. “I see it as the next step for somebody’s pathway, no matter who they are. TJC has been around for nearly a century, is successful in the growth and the quality of their product and the students. It doesn’t matter what job they get or what career they choose, they’re adding to and contributing to wherever they are in society. And that’s really the goal. The goal isn’t just to get the diploma or the certificate, it’s finding a way to put things within your toolbox to be able to add back and create value somewhere. And it doesn’t have to come from a grandiose four-year university. That’s not the end game. It’s really not. TJC is a full-fledged basket full of experiences that you have the opportunity to take advantage of.”

Roy Martinez is currently serving as the chair of the Tyler Area Chamber of Commerce and is an executive board member of the Tyler Economic Development Council. He is also a graduate of Leadership Tyler, Class 19, and has held numerous board positions with various organizations. He resides in Tyler with his wife, Anne, and their two children.

From TJC TO STANFORD

TJC alum and incoming Stanford University student Dolly AuBuchon is preparing for life on “The Farm” while working full time and prepping to sell her house. But a busy lifestyle and overcoming anything that gets in her way is nothing new to AuBuchon. “I dropped out of high school at 16 and had my first attempt at college derailed by health issues before succeeding at TJC. Did I think I had any chance of being accepted to Stanford? Never in a million years. I tried anyway and now, here I am—preparing for life at Stanford this Fall.”

AuBuchon, who graduated from TJC in May of 2021, will be moving to Palo Alto, California in the coming months, but she’s already gotten a jump on her time at Stanford. “Stanford has a program for all incoming students called Approaching Stanford, which is administered via Canvas. This is a way for them to teach you about life on campus and help you complete all new student paperwork over the summer so that you aren’t having to do it in a rush once you arrive,” she said. “In addition, I have signed up for a pre-orientation camping trip that they offer. This gives you a chance to meet some of your fellow ‘newbies’ before plunging into the hectic campus life.”

While studying International Relations and Public and International Policy with an interdisciplinary in Democracy, Development and the Rule of Law at Stanford may bring a lot of challenges, AuBuchon says TJC prepared her for whatever comes next. “Public Administration is how the majority of citizens experience their government at work. I felt it was important to understand how that level of government works in order to understand how to make government better at the higher levels,” she said. “That street level government and how it operates … is what I learned through my program at TJC. I believe that knowledge will serve me well as I learn about, and eventually pursue employment with, higher levels of government or organizations. TJC gave me an excellent foundation of knowledge to build on at Stanford.”

To those who helped create that foundation at TJC, she said she can’t thank them enough. “I could not have done it without each and every one of [my professors] and I will carry all of you to Stanford with me,” said AuBuchon, who plans to become more active on social media to keep in touch with professors and former classmates. “Professors don’t always get the opportunity to learn what becomes of the students whose lives they have touched. I want to give them that. I also hope that students take an interest and that it encourages them to dare to dream big and
to then pursue that big dream. I want them to know that they CAN get ‘here’ from ‘there’.”

For those students looking to get from “here to there,” AuBuchon has some advice: “Don’t let the perceptions of others or your background write the script of your future for you. Grab the pen and write it yourself! You are capable of breaking the mold, defying stereotypes and being more than you maybe dared to dream.”

Post Stanford, AuBuchon hopes to work for the government or a non-governmental organization (NGO) overseas, work on policy in D.C., or run for public office. “Bottom line, though, is that I want to find that place where I feel I can make a substantial impact and change things for the better,” said AuBuchon. “I also hope to come back to TJC and encourage others to dare to go further.”

For more TJC success stories, read the latest issue of our Apache Magazine by scanning this QR code: