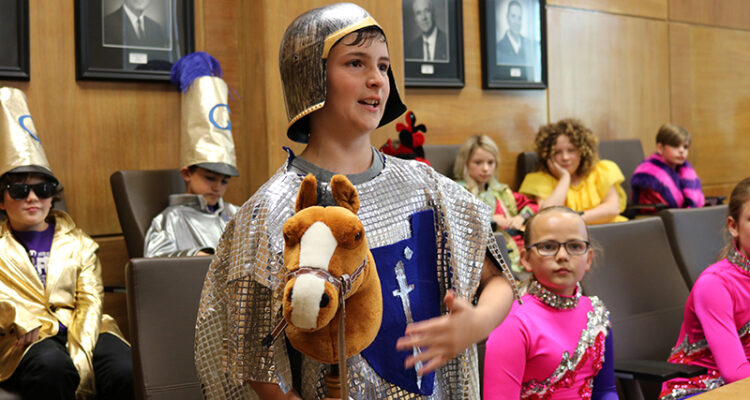 The State V. Jack Robinson: A Fairy Tale on Trial by Sydney Baker

In the spring of 2019, Judge Christi
Kennedy’s normally somber and serious
courtroom was full of questions, laughter,
and intrigue. Students from Tyler ISD’s
Caldwell Arts Academy filled the jury seats and
audience, while their parents, teachers,
and local legal professionals looked on
at the spectacle.

Dressed as ogres, gingerbread men,
knights and other fairy tale characters, the
students put Jack Robinson (of Jack and
the Beanstalk fame) on trial—his crime:
second degree intentional murder. After
pleading not guilty, the trial began with
the judge reminding the jury that, under
the law, a man or woman is innocent until
proven guilty. Then the trial proceeded as
any trial would, with the prosecution and
defense making their opening remarks.
Multiple witnesses were called to the stand,
including Jack Robinson. During his time
on the witness stand, the judge found
Jack in contempt of court and charged
him $50. After closing remarks, Jack’s
fate was in the fairy tale jury’s hands. In
the end, the jury was hung, and Jack
was free to go.

After the jury’s verdict, local
attorney Jason Mazingo and the
fairy tale jury discussed whether
they thought Jack was guilty or
not. Then Mazingo encouraged
the students to ask any questions
they had about trials, lawyers and the
legal process. Hands shot up all over the
courtroom, with the young jurors asking
questions like, “What should Jack do
before his trial?” “How much do
lawyers get paid?” and “What
happens after a hung jury?”

Mazingo and the fourth-graders covered many
topics, ranging from blackmail to Judge Judy.
Mazingo also educated the students on terms
like “hung jury” and “reasonable doubt,” while
providing insight into the difference between a
criminal case and a civil case. The kids were full
of interest, and the question and answer section
continued well into the afternoon, only stopping
because the students needed to get back to class.

Today’s kids are curious about what happens
before, during, and after a trial. That’s why,
each spring, the Tyler Area Association of Legal
Professionals orchestrates the Fairy Tale Mock
Trial. The event, completely sponsored by the
TAALP, originally began in the 1980s as part of
their Law Day community-service activities.

Every year, Tyler ISD fourth grades are invited to
participate in the event as well as private schools
in Smith County. Once the schools have been
selected, the trial begins. According to Helen
Koch, a paralegal for Brown, Bauman & Smith,
P.C., and chairman of the event, “Three different
scripts have been used over the last four years:
Goldilocks vs. The Three Bears, The Murder
of Humpty Dumpty and the State vs. Jack
Robinson. Each attorney handles their trial a
little differently. The attorneys I’ve worked with
let the jury discuss aloud in the courtroom. It
is fun to watch the students ‘deliberate’ the
case. We have had numerous hung juries, guilty
verdicts and not-guilty verdicts. We’ve had a
hung jury on first vote and after discussion
turned into a unanimous not-guilty verdict.”

Planning a mock trial requires the collaboration
and cooperation from several organizations.
According to Koch, “TAALP works with the
Executive Director of the Smith County Bar
Association to contact its members, the Smith
County Young Lawyers, students of the Tyler

Junior College Paralegal program and the members
of TAALP to request volunteers. The commitment is
only about two hours, in the morning or afternoon,
during one week of the year. During Law Day, which
is held annually, there is also a mock trial competition
with local high school students and a tour of the
federal courthouse for eighth grade students.”

Koch praised the dedication of the TAALP members
to making sure the event has enough volunteers in
order to run smoothly and efficiently. “I have been
the chairman of the mock trial committee for the past
four years. It has become my ‘claim to fame.’ At least
everyone knows what I’m e-mailing them about when
they see my name between January and May each
year. We have a group of volunteers that have stepped
up to the plate each year, for which I’m very grateful.”

For local legal professionals, the mock trial provides
an opportunity to interact with the community,
while also shaping children’s understanding of legal
processes, which often seem strange and scary to kids.
Lauren Maes-Forbey, a legal assistant at the Gimble
Law Firm, has participated in the mock trial for the
last two years. According to Maes-Forbey, “Most
children have a rudimentary understanding of our
legal processes based on what they see on television,
which is grossly sensationalized and fictional. The
mock trial gives them an opportunity to see the
inside of a real courtroom in a fear-free setting, and
it helps them understand, at least at a basic level. I
enjoy helping children and the adults who attend
understand our legal system in a fun way. Children
are afraid of what they don’t understand, and I see this
when I am at lunch with my husband, who is a Tyler
police officer. All it takes is someone who is willing to
take the time to alleviate those fears, and I believe that
can make all the difference.”

To TAALP members, the children make the event
worthwhile and are the reason they continue to
volunteer year-after-year. Brandi Turchi, a certified
paralegal at Brown, Bauman & Smith, P.C., assists
with the TAALP Mock Trials because, “It brings
awareness of the court system to school age children,
and it’s also like a hands-on career day for the kiddos
who take part in the mock trial. The children get to
learn about what type of responsibilities attorneys,
judges, plaintiffs and defendants have in a courtroom.
It’s a wonderful learning experience for children.”

Year-after-year, the event never fails to stimulate and
inform kids about the law. As Koch summarizes,
“Hopefully this will generate an interest in the legal
field for their career choice.”

Please visit taalp.com or smithcountybar.com for
more information on how to participate in this event.