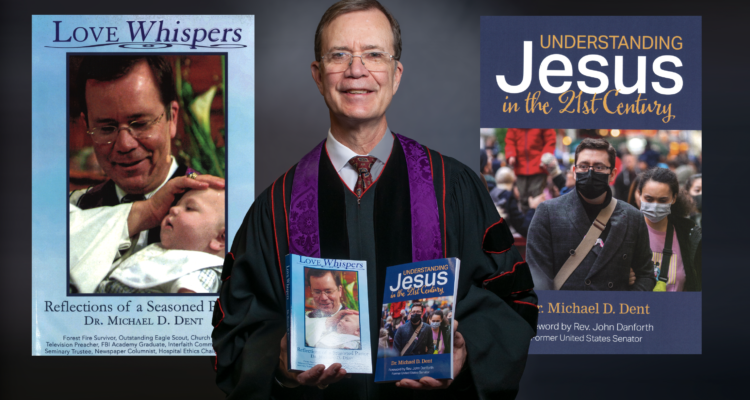 My life changed unexpectedly in 2017 when I was diagnosed with MCI, Mild Cognitive Impairment, a neurological condition affecting, among other things, one’s short-term memory. Less than a year later, I had to retire from a preaching ministry of forty-five years. Ten of those years were at Marvin United Methodist Church in Downtown Tyler. My final dozen years in the pulpit were in Denver’s first church.

What does a preacher do when unable to preach? I was called to write, beginning with my ministerial memoir, Love Whispers. Published in December 2019 by Amazon, its 256 pages are filled with stories of grace, some famous faces, spiritual wit and wisdom, travel adventures, Holy Ground and heartbreaks redeemed. Proceeds have provided generous gifts to the Alzheimer’s Association.

My next book is Understanding Jesus in the 21st Century, published in February 2021 by Market Square Books in Knoxville, Tennessee. Ten percent of all sales are going to the Alzheimer’s Alliance of Smith County and the Alzheimer’s Association. East Texans are especially attracted to the book because it shares how Jesus connects to politics, racism, sports, Willie Nelson, other religions, sexuality, pets, the pandemic, contentment, and eight more compelling social and spiritual forces in our culture. Jesus of Nazareth, the Anointed One, is timely and timeless. He is invitational and inclusive. He is personal and universal.

The foreword to Understanding Jesus in the 21st Century is written by a prominent public servant who knows and understands the Christ. The Honorable John Danforth is an Episcopalian priest. The Republican earned law and theology degrees at Yale and Princeton, served as U.S Senator from Missouri for eighteen years, U.S. Ambassador to the United Nations, and wrote in 2015, The Relevance of Religion: How Faithful People Can Change Politics.

Danforth declares in the foreword to Understanding Jesus in the
21st Century, “We are called to live not only for ourselves but for others. The model here is the self-giving love of Christ on the Cross and is the opposite of any advice we may receive about how to get ahead in life. Indeed, the counterintuitive message of Christianity is that the way to gain your life is to lose it. Dent frames this as hospitality to the stranger and concern for ‘the hurting, the hungry, the homeless.’ We believe that in Christ all things hold together. Michael Dent is a gifted pastor with a distinguished ministry in Texas and Colorado. Now, he is sharing his especially religious insights with a broader audience.”

In addition to Senator Danforth’s inspiring foreword, two United Methodist bishops and a prominent Presbyterian pastor from across the country have endorsed it with high praise.

Understanding Jesus in the 21st Century is now available online through Market Square Books. It is also coming soon on Amazon and Kindle. Signed copies are available through mikedentdm@gmail.com.