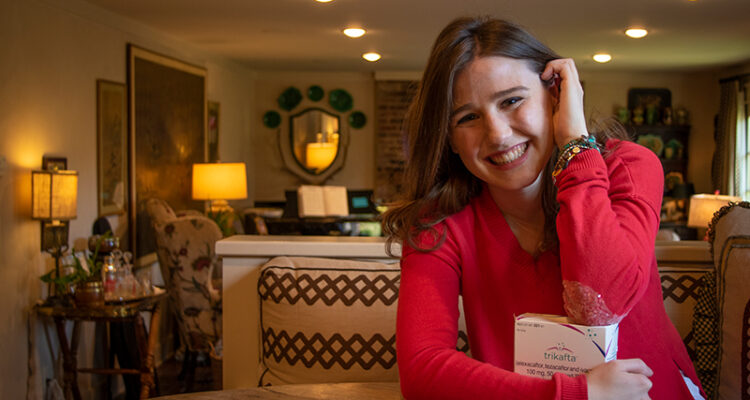 Feeling The Magic of a Miracle by Grace Knight

“The approval of a new medication this
past October gives me hope that easier years
are on the horizon. From the first day I
received it, until now, I can’t help but smile
with hope that things are looking up.”

My future was delivered to the Harrison Package Room at
11:02 AM. As soon as I got the notification, I threw on
clothes and sprinted to the elevator with wet shower-dripping hair.
Once I hit the ground floor, I ran to the package
room as fast as I could. When the mailman looked at me, I
beamed and handed over my school card. I had never been so
excited about a single package in my entire life. He scanned my
card, rustled around, and eventually handed me a thin white box.
Although he had no idea how special the moment was, I like to
think that if he knew what he was holding, he would feel the
magic too. I grabbed the box with both hands, spoke a breathless
“THANK YOU!” and was gone in a flash.

That morning I would take my first dose of Trikafta, a new
medication that was approved for people with cystic fibrosis.
It is a triple-combination modulator therapy made by Vertex
Pharmaceuticals which targets the root cause of the disease,
instead of just the symptoms. The reason that Trikafta is such a
big deal, and warranted my race to the mail room, is that in the
drug trials it was proven highly effective, with patients gaining
over 10% of their lung function back within weeks. However,
Trikafta isn’t the first modulator therapy to come out of Vertex. In
the past Vertex has released two other similar therapies (Orkambi
and Symdeko), but Trikafta is the one with the greatest reach
within the CF community. This is because Trikafta is effective in
people who have at least one copy of the most common mutation
of cystic fibrosis (deltaF508). This essentially means that over
90% of the CF population can take the drug.

But if Vertex had already made modulator therapies before, why is
Trikafta so much more effective? It all lies in the third piece of this triplecombination drug. Orkambi and Symdeko both only consisted of two
medications. However, Trikafta uses the two medicines from Symdeko,
while adding a third called Elexacaftor. It is this third medication that
makes all the difference. Because I have two copies of the deltaF508
mutation, I was able to take both Orkambi and Symdeko. On Orkambi,
I gained over 10 pounds within the first five months on the drug, but I
didn’t feel a huge change within my lungs. Additionally, Orkambi was a
powerful drug and the side effects, such as hair loss and chest tightness,
eventually outweighed the benefits. Then, I began Symdeko which wasn’t
as hard on the body, but I didn’t feel a huge difference in my lungs. While
I am sure that it made me stronger, it was nothing like how Trikafta has
made me feel.

After I took my first dose of Trikafta, I felt it working within hours. Over
that first day, I coughed up a lot of mucus and cleared out parts of my
lungs. After about three days, I stopped coughing as frequently and felt
myself breathe easier. Just before I received the drug, I had gotten a cold
and was struggling to get my health and sinuses under control. Once I
swallowed that morning dose, I felt some of that infection calm down.
My nose cleared up and my mucus became a lighter color. It was as if
someone had turned back time a little to when it wasn’t as hard to breathe.
The most notable change to me is that when I wake up in the morning
my chest is no longer heavy from mucus. Before Trikafta, every morning
I had to start my breathing treatments quick before I could do anything
else, because of all the mucus that had built up overnight. I would spend
the entire day coughing it up and then once I went to sleep it would build
up again. Now, I wake up and no longer have as big of a burden in front
of me. I still have to do all of my treatments, but I wake up and feel good
even before I start them.

The response that I have had to the drug, isn’t limited to my case. I know
that people across the nation, and even others in Tyler, are feeling the
relief that I have felt. This drug isn’t a cure-all, it can’t undo the years of
damage that CF has done, but it is a step in the right direction. With this
drug, the door has been opened to so many more possibilities. Within
the drug pipeline there are currently eighteen drugs that are being tested
for correcting the root problem of CF. They all have the potential to be as
great, or even better, than Trikafta. It is for this reason that I am certain that
we will find a cure soon.

While it is, of course, because of all the hard work that the scientists at
Vertex put in that have made this drug possible, it is also thanks to the
people of Tyler, Texas, that it was developed. For twenty-two years, this
city has fought with me and many others against this disease. Together,
we have raised over $6 million. Ninety cents of every one of those
dollars has gone directly to research, and it is from that research
that Trikafta was born. So, although this drug is not a cure and
the fight isn’t over, just know that your time and money have truly
made history and that when I am taking in deeper breaths, I am
always thinking of you, the people of Tyler, Texas, who have helped
me get there.”