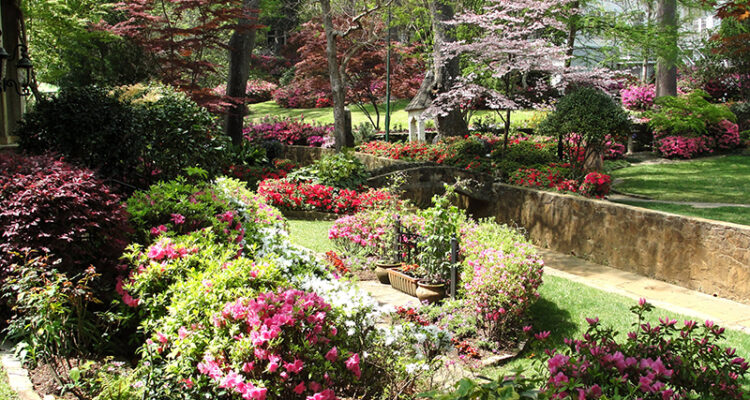 Unlike our neighbors in Dallas, Austin, or San Antonio,
Tyler along with the majority of East Texas has unique
conditions which allow us to grow beautiful azaleas.
Our Azalea Trail is a shining example of how well azaleas thrive
in this area. Abundant filtered shade, regular rainfall, and sandy loam, well-drained, acidic soils combine for the right ingredients
for these eye-catching, spring beauties.

Azaleas grow best in filtered sunlight and in a highly organic soil.
An ideal exposure is under the branches of large deciduous trees
or high canopy pines. An east or north facing side of the house or
fence is also a good location. However, dense, all day shade can
result in spindly plants with sparse blooms.
The soil absolutely must be well-drained. The ideal soil is a
sandy-loam, high in organic matter. If water tends to stand after
a rain, or the soil has a high clay content, you will either need
to select another site or make some soil modifications. If you
have a less than ideal soil, you can still grow azaleas by making
a mound or raised bed with a loose soil mix. A good mix here
is one third sphagnum peat moss, one third composted (black)
pine bark, and one third clean sand. Regardless of your soil, add
large quantities of ground pine bark, compost, peat moss, or leaf
mold to the soil to increase drainage and aeration.

Although azaleas are sensitive to waterlogged soils, they have very
shallow root systems which can dry out rapidly during drought
conditions. Always maintain a good layer of mulch, such as
pine bark or pine needles, on the surface of the soil. Mulch not
only maintains a steadier level of moisture, but also helps keep
the azalea bed free of weed competition. Do not mechanically
cultivate the soil around your azaleas. Pull them by hand instead.
Always remember if you properly space your azaleas and mulch

early on, they should spread to touch each other and choke
out weeds themselves. This goes for all ornamental plantings.
Anytime sunlight hits bare soil, weeds will emerge.

Be sure to water your azaleas during the summer to prevent
wilting during hot, dry weather. In the absence of rainfall,
thoroughly soak the soil in the root zone about once every week
or two during June, July, and August. Although azaleas most
assuredly need irrigation during the summer months, most
homeowners with sprinkler systems tend to water their lawns
and shrubs too frequently. To create more extensive root systems,
avoid root rot from water-logged soils, and help prevent diseases
which all require a wet plant surface to “germinate,” deep soak
watering with less frequent sprinkling is essential.

The time to fertilize azaleas is right after they bloom. The most
important factor in fertilizing azaleas is to use small amounts
per application. Use any of the commercial acid-forming azalea/
camellia/gardenia fertilizers made for acid-loving plants and
follow directions on the label. The general rule for growing azaleas
is to fertilize once growth begins in spring and no later than
July. Above all, evenly distribute the fertilizer lightly throughout
the bed, never in concentrated piles, and water in after applying
to make sure the fertilizer isn’t still on the foliage which will
cause burning. In large plantings, 21-0-0- (ammonium sulfate)
is more cost effective.

Pruning is generally done the same time as fertilizing and mulching,
most often just as the blooms fade. Generally, a light shearing is
adequate. Shearing as the new growth emerges creates denser shrubs
with even more blooms the following spring. You may also want to
cut back lanky shoots to make your azaleas more uniform and less
“scraggly.” Flower buds are formed in late summer, so no pruning
should be done after that time. If you prune azaleas during the fall
or winter you will be removing the spring blooms.

In the summer, the newer leaves of azaleas may yellow with the
veins remaining darker green. This is caused by a lack of iron
and is called chlorosis. Iron chlorosis is common when plants are
near sidewalks or building foundations where there is a higher
concentration of lime from the mortar used in construction.
Azaleas growing next to lawns which have been limed may also
show iron deficiency. Most deep well irrigation water is also
alkaline. Iron chlorosis can be temporarily corrected by applying
copperas or ferrous sulfate. Some leaves always turn yellow in
late winter or early spring and is no cause for concern since this
is a natural process of the plant shedding old leaves. Sometimes
yellow new growth can be caused by a root system planted too
deep or by roots otherwise damaged or diseased.

Finally, there are a few insects that may bother azaleas. Most
common is the azalea lace bug. These feed on the underside of
the leaves, giving leaves a gray, blanched or stippled appearance.
The underside of the leaves becomes discolored by shiny black
excrement and cast skins. Azaleas in direct sun, or under stress,
are more prone to lace bugs. A granular application of a systemic
insecticide containing imidacloprid applied when the new
growth is coming out is what the Ruby Mize Azalea Garden at
Stephen F. Austin State University uses.

Azaleas are considered finicky, but if you have the right conditions
and follow a few simple rules, the many different types can be
great additions to our beautiful East Texas landscapes. Nurseries
sell many different kinds of azaleas: large to small and once
blooming to repeat blooming. Most everyone can find an azalea
that appeals to them.

The most common azaleas grown in East Texas are Southern
Indicas. They come from Japan and can grow up to 6 feet high
with an equal spread. Flowers are usually 2 to 3 1/2 inches across.
The most common varieties of Southern Indicas are George
Taber (lilac), G.G. Gerbing (white), Judge Solomon (pink), and
Formosa (magenta).

Kurume azaleas are typically referred to as dwarf. A normal size
for these varieties in East Texas is 2 to 3 feet tall. Kurume azaleas
grow slowly and have denser growth than Southern Indicas.
Flowers are usually 1 1/2 to 2 inches across. Christmas Cheer
(red), Coral Bells (pink), Hino Crimson (red), Hinodegiri (red),
and Snow (white) are popular varieties.

Later-blooming varieties are the Satsuki hybrids. Satsuki means
“fifth month” in Japanese. Satsuki hybrid azaleas flower later in
the spring season, usually mid-April through May. They have
larger flowers than Kurumes and a low, dense, mounding growth
habit. The Gumpo (pink or white) and Macrantha (pink/orange)
cultivars belong to this group, as well as, Wakaebisu which can
be easier to find for sale.

The Robin Hill azaleas are commonly referred to as
“re-blooming” azaleas because they bloom heavily in the fall and
also flower in spring. Sir Robert is a popular Robin Hill variety.
Its flowers range from white to pink. The most popular Robin
Hill variety is Watchet, which produces large 3 1/2-inch flowers
that are clear pink and ruffled. Plants are compact and spreading.
Conversation Piece is a bicolored Robin Hill variety.

Encore azaleas are “the azalea that knows no season.” Repeat
blooming Encore azaleas were bred and developed by Buddy
Lee, of Louisiana. With 30-plus varieties now, you can have a
wide range of bloom time, plant heights, and colors.

Still yet, deciduous azaleas are bred from native azaleas and have
fragrant honeysuckle-like blooms in shades from white and
pink to yellow and orange. They bloom on bare stems before
the leaves come out and are a bit harder to find in the trade.
In addition to our beautiful pink and white “wild honeysuckle”
(Rhododendron canescens), the most commonly available are
generally the Aromi hybrids which come in a range of colors
including yellow and orange.

Spring is a great time to pick out azalea varieties at garden centers
since you can see exactly what colors you are getting.