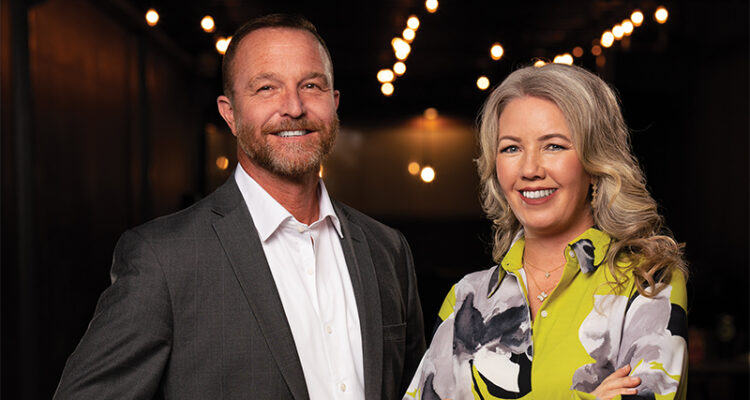 There are many books on the market that fall into the
category of “self-help.” In fact, in the publishing world
that particular category is second only to “how-to” books
in terms of the number of titles that are generated every year by
authors. Th e two categories are related. Th at is especially true of a
book published last June entitled Blind Spots, which has a subtitle
of equal importance: What You Don’t Know CAN Hurt You. Th e
word “CAN” is emphasized on purpose. It reflects the passion
the book’s authors have for the subject matter. Th e authors felt
such emphasis on the cover would get the attention of potential
readers. Th is book was written because its two authors believe
strongly in the message and are committed to helping people
reach their true potential. For Brian Brandt and Ashley Kutach,
the authors, creating this book was at first a way to improve
the delivery of a training seminar. Over time, writing the book
became a mission.

Ashley and Brian first met ten years ago when they both had
children attending classes at Grace Community School. Ashley’s
background was in delivering training curriculum at JP Morgan
Chase for thirteen years, eleven years of which she spent in
instructional design. Brian’s background was the ministry. Th e
first fifteen years of his career was working for large, Christian
camps, including Kanakuk Kamps and Sky Ranch. After that, he
served as Executive Pastor at Grace Community Church.

Although they had different career backgrounds, they also shared
a great deal of similarities. Ashley grew up in Los Fresnos, a little
town in South Texas. Brian grew up in Lawton, a small town in
Oklahoma. Brian met his wife of twenty-seven years, Ann Terese
Brandt, at Kanakuk Kamps in Branson, Missouri. Ashley met her
husband of twenty-one years, Andy Kutach, in the parking lot of
the dorm at Texas State in San Marcos, where she received both
her bachelor’s degree and master’s degree.
Th ey both have three children: Brian has one boy and two girls;
Jeremy (23), Katie (20), and Heidi (16). Ashley has two boys and
one girl: Caden (18), Ryder (16) and Willow (14).

During the last four years, Ashley has been working at Mentoring
Minds as Vice President of People and Chief of Staff . In December
2019, she completed her Ph.D. in Human Resource Development at
Th e University of Texas at Tyler.

Brian earned a Bachelor of Science in Accounting from the
University of Oklahoma and a Master of Global Leadership from
Fuller Seminary in Pasadena, California. After a lifetime spent
supporting the transformation of individuals and organizations, he
gained a passion for developing stronger leaders and organizations.
For the past eight years, Brian has been CEO and part owner of
Core Insights, an organization he co-founded with Lisa and Michael
Lujan, the founders of Mentoring Minds. “Core Insights is a company
providing training, strategic planning and coaching to a myriad of
businesses, nonprofits and associations all over the country,” Brian
explains. “We work to help our clients in five core areas: Leadership,
Communication, Organizational Culture, and Personal Growth.”
Core Insights’ greatest strength is in developing people. Th e company
employs a deep understanding of adult education and effective
training methods to guide employees to “aha moments” in order for
them to gain new soft skills. Th e goal is to help their clients to expand
the capacity of their teams and the direction of their organization.

Fourteen years ago, as Brian was working on a master’s degree and
going through the Leadership Tyler program, he came to a realization
that he wanted to make a change in his career. He had a sudden desire
to switch from leading within a company, to working from the outside
with other organizations and individuals to help them reach their
potential. “Th e whole concept of recognizing one’s blind spots came
out of that realization. It became part of the curriculum I wanted
to use as an outside coach working with the employees of other
organizations,” he says.

Prior to working at Mentoring Minds, Ashley spent four years with
Core Insights. She was teaching aspects of recognizing blind spots,
but this was before she and Brian had discussed the idea of writing
a book together. For most of her career, Ashley has worked closely
with employees at all levels of an organization. As an accomplished
facilitator and development coach, she combines compassion with
down-to-earth basics to help people through a process of self-discovery—to improve their personal leadership skills. “I was always
interested in helping other people. Guiding people through the
process by drawing out information from each individual through
the questions I asked has been a favorite part of the job for me,”
Ashley says. “I always love watching for that moment when the light
bulb goes off , that ‘aha moment’ of excitement that happens when
you know they suddenly ‘get it’ and have progressed to a new level.”

The idea for the book was something of an evolutionary process. Ashley
recalls, “I noticed by talking with the students in the training that many
lost opportunities occurred because people were not aware of the things
they were doing that were actually holding them back from achieving
their goals.” Brian remembers having discussions with Ashley about
what they could do during training sessions to help people to improve
their ability to reach their potential. “So many things, so many ideas
that we threw out in those discussions, led us to the logical conclusion
that creating a book that described exactly what we were talking about
could be the answer. Th at is where the decision to collaborate on a
book originated,” Brian recalls.

Together, Ashley and Brian first outlined the chapters and
sections of the book. “We agreed on beginning the book with a
chapter that provides an example of how not recognizing one’s
blind spots can have devastating effects. We chose to make each
section about a different aspect of recognizing a blind spot and
then gave examples from people who had gone through previous
trainings as illustrations of what to look for in discovering one’s
own blind spots,” Brian explains.

The second chapter uses an example from Ashley’s life to help
define what we mean by the term “blind spots.” “It’s really a
simple example,” says Ashley. “When I was learning to drive,
I discovered that, even if I looked into the side mirrors and
the rearview mirror, there could still be a car lurking beside me
that I cannot see. I learned it when I started to change lanes
after looking in the mirrors, and my instructor said, ‘check your
blind spot.’ I turned my head and looked over my shoulder, and
there was a car coming up beside me that I had not seen in the
mirrors. It was in my blind spot.”

Each of us has blind spots, that we frequently are not aware we
have. They are those little weakness, problem areas, attitudes and
habits that may hold us back from realizing our total potential.
They can result in our not getting a promotion we thought we
deserved or having a personal relationship deteriorate without
our understanding why. This book explores why a blind spot is
most often negative; but it can also be a positive trait you are
not aware of, such as a hidden talent you need to discover. Those
people who identify their blind spots are more apt to commit to
working on them, thereby achieving their goals and becoming
more likely to reach their total potential.

“When we decided on how to structure the content of the book,
we each chose sections to work on separately. Once we each had
done our initial work, we combined them and worked on one
another’s parts. It was a great deal of going back and forth,” says
Ashley. “It was not something we did quickly,” Brian interjected.
“One of us would ask the other, ‘This needs something…do you
have an idea?’ There was a period of about two and a half years
where it just sat idle. We both have three kids, jobs, and other
things that took over our time.”

About a year ago, they agreed that completing the project should
be a priority. “By then, I was no longer working full time for Core
Insights. We picked up where we left off…made notes and exchanged
our existing parts of the project…brainstormed and then worked
independently again, sending it back and forth,” Ashley explains.

One of the things that makes this book especially useful as a
tool for the reader to work on their blind spots alone is that each
chapter includes a list of “Personal Reflections” topics. These are
things to think about and ponder that are designed to help the
reader gain a better insight into their personal self-observations.
These are followed by a series of “Group Discussion” questions
that can be used in sharing the material with others, providing
an even broader perspective for self-discovery.

The book’s appendix includes a personal Feedback Worksheet;
a Blind Spot Action Plan; and a listing of some of the most

Common Blind Spots and Suggested Actions to take to overcome
them. Th e book is designed to make it easer for a person who
is truly committed to discovering their blind spots, and once
discovered, enable them to do something about them.

“We completed the book and sent it to the publisher in June 2019.
It was finished just in time for me to go on vacation!”
Brian says almost laughing about the state of exhaustion they
both felt at having finally completed the project.

“So far the reaction to the book has been very positive, which is
very gratifying,” Ashley reports. “We have had several different
associations that have invited us to speak at corporate gatherings
and conferences. We have heard from individuals who have used
the book with their book club groups. One man told me he
wished he had the book four marriages ago!”

The topic itself, the idea that one can improve the direction
one’s life is taking by simply taking stock in one’s personal blind
spots and employing solutions to change them from negatives
into positives, is certainly worth the eff ort it takes to read the
book. “We have heard many people make the comment that
they appreciate how actionable ideas from the book are”, says
Brian. “Almost everyone who contacts us comments how the
ideas from the book are easy to implement and those who have
tried it frequently remark how they have improved their personal
relationships at work and other places.”

Brian says that the book has the possibility of making a drastic
impact on relationships and career effectiveness. It can improve
a career trajectory and make the difference between having a
strong relationship or no relationship. Using the principles of self-evaluation and applying the introspective solutions to correct one’s
blind spots can put an end to detrimental behavior that might
otherwise ruin a person’s relationship with other people.

Ashley emphasizes that the book is not designed to fi nd the fault
in other people’s lives. “It’s is all about finding things in yourself.
People who need it the most are most likely people who don’t
know they need it. Introspection is important.”