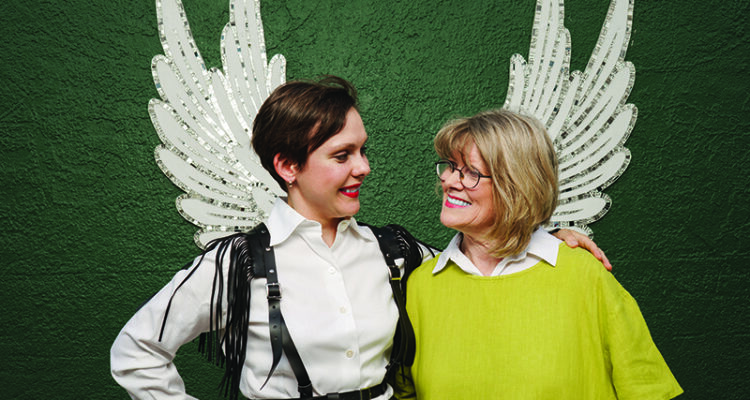 The Artists Behind The Wings of Tyler by Robert Marlin

October third marks the first anniversary since the unveiling of “Wings of Tyler.”
Many call it a public art project, but in fact it is an art project for the benefit of
the public, totally financed by private donors. Not one taxpayer dollar was spent by
the City of Tyler on its creation and installation.
The project came about through the efforts of two local artists.

Cassie Edmonds grew up in Kilgore. She graduated from
high school and then attended Kilgore Junior College.
At the age of thirty-one, Cassie enlisted in the army,
where she spent five years serving her country. In 1996, she
moved to Tyler and has lived here ever since. Cassie earned
a bachelor’s degree from the University of Texas at Tyler. She
worked in sales and sometime between 1999 and 2000, her
mom mentioned a mosaic class was beginning at the Tyler
Museum of Art. “I had hobbies all my life, making jewelry,
cross-stitch … always doing something with my hands,”
Cassie says. “This class was teaching a simple procedure:
gluing broken pieces of pottery or china onto a board. Within
six months, I saw a true mosaic, an image made out of pieces
of cut glass. I read about the history of mosaics and went to
a local stained-glass store looking for scraps. I slowly picked
up some tools and began creating mosaics of my own. I am
primarily self-taught, learning more techniques as I went
along. Now I have a passion. I never knew what that meant
until I discovered my passion.” Cassie quit her job six years
ago. Now, she works as a full-time, professional artist. One of
her works, an angel entitled “Touch of Grace,” is just inside the
entrance of Bethesda Health Clinic.

Dace Lucia Kidd is from Latvia, one of the three Baltic states in
the northeastern part of Europe. When she was very young, she
suffered with asthma, which kept her from getting involved in
sports. Recognizing she had a talent, Dace’s parents enrolled
her in art school at the age of five. They thought learning art
would keep her busy and out of trouble. “Going to school is
different in Latvia than it is here. There, if you have a particular
talent, you can apply to study at an upper secondary school.
These are designed more for art and theatre: actors, dancers,
musicians and artists. My grade school teachers told me the
competition was fierce and that I would never get in. I decided
to prove them wrong,” says Dace. “Although I thought I would
study science, when I graduated, I got a scholarship to the Art
Academy of Latvia and earned a bachelor’s degree in painting.
From there, I studied in Palermo, Sicily, at the Accademia di
Belle Arti di Palermo, a very prestigious school. There, I had
advanced training for two years.”

By happenstance, and through a group of online friends,
Dace’s work was reviewed by an art critic from the U.S., who
wrote what Dace considered an insightful critique of her work.
“Throughout the critique, he used male pronouns. He did not
know I was a girl and I did not know he was an arrogant Texan!”

To make a long story short, Dace used her commission money
to take a trip to Texas. She wrote the critic and asked if he would
show her places she wanted to see in Texas. James Kidd from
Tyler agreed to show her around. They had a wonderful time,
and when she returned to Europe briefly, they maintained a
long-distance relationship. Eventually, they agreed she should
move to Texas. They were married on December 13, 2012, and
she became a U.S. citizen in 2017.

By the time Dace arrived in Tyler, Cassie was well established,
her work being represented by a prestigious Dallas gallery and
people regularly commissioning her to create mosaics. “A new
artist in town piqued my interest,” Cassie recalls. “I saw her as
a go-getter, always putting on shows and marketing herself in
the community.” At the same time, Dace kept hearing about
Cassie. “Everybody I met would ask if I had met Cassie. When
I was about to produce my first local show, I went to Cassie’s
studio and introduced myself. I met her cat, and we all became
instant good friends!”

“One of the problems being a professional artist in a place like
Tyler, is that everybody is always asking you to do something.
Always for free,” Cassie laments. “This is something I had
discussed several times with Dace. We both wanted to see if we
could come up with a project, something we could do together,
that would be sellable. We tossed ideas back and forth for three
years before we struck on the wings idea.”

“We both share a vision about public art, something that
can enhance our city that the public can take pride in and
embrace,” says Dace. “We also both have a passion about
downtown. I grew up in a place where the downtown was the
heart of the city. When I moved to Tyler, I saw a downtown
that was struggling and neglected.”

In a short time after her arrival, Dace got involved with
the group that has been working to develop and revitalize
downtown. She was commissioned to paint a mural called
“The Eyes of Tyler” on the outside façade of a building. When
it was completed, and people started making comments about
it, Cassie and Dace both realized their dream of working
together could be realized with a work of art that combined
both of their skills, could also be interactive, and would serve
as a drawing card to bring more people downtown.

From the beginning, the two artists planned for the project to
be privately funded: an art project the public can enjoy but for
which no tax dollars would be required. Once they determined
what it would cost, they set about soliciting donors to fund
the project. According to Cassie, they expected it would take
several months to get the funding. “It actually only took ten
days,” she says.

The idea of wings is not new. It has been done elsewhere. What
made the “Wings of Tyler” different is how it was created.
Instead of a flat painting on a wall, Dace and Cassie decided
to create a three-dimensional sculpture, decorated with cut
glass. “At first we thought just one set of wings, but where to
put it was the problem,” says Dace. The answer came when
Cassie mentioned the idea to her landlord. “John O’Sullivan
and his son, John Jr., own the downtown building where
I’ve lived for years. They also own a building at the corner
of Erwin and Broadway. When I told them our idea, they
immediately suggested the large wall that takes up half
a block facing Broadway. That’s when we thought about
making it a bigger project.”

Visitors to Tyler, and even people who live in Tyler, interact
with the wings by taking pictures of their loved ones or pets,
posing in front of the wings. In all, there are five sets of wings:
two that are adult sized, one that is built for couples, one that is
sized for preteens or can be used with someone in a wheelchair,
and the fifth is for a pet or toddler. The largest set is at the top
of the hill, and the smallest is down the hill.

Work began in January 2019 to design and then build the five
individual sets of wings. Dace designed each set of wings and

“What was really remarkable was the number of people who called
and volunteered to help us.”

Cassie applied the mosaic aspects. The wings are made of a
water-resistant product called Wediboard. It is similar to the
HardiBoard product used in home construction, but it is
much lighter in weight. Dace cut out the wings and drew the
lines for Cassie to use as a guide for applying the cut glass
pieces. They are bolted to the wall with heavy bolts that can
withstand high winds and kids tugging on them. “What was
really remarkable was the number of people who called and
volunteered to help us. At one point, we had quite an assembly
line going. I had a difficult time cutting the individual pieces
of glass fast enough to keep up with the crew that was gluing
them onto the wings,” Cassie says.

The goal was to have the display completed in time for the
CityFest celebration that was scheduled for the first weekend
in October 2019. In addition to the large sets of wings that
were bolted to the wall, each sponsor received a miniature
replica as a “thank you” gift. The display was completed
about a week before the deadline. The unveiling was held on
October 3, 2019. “One of the greatest satisfactions is watching
people come and take pictures in front of the wings. Tourists
are there almost every week. Brides have their pictures made
wearing their wedding dresses. School kids line up in groups,”
reports Dace. “What I am most proud of,” says Cassie, “is that
two working artists have created a piece of art that an entire
community has embraced. People take their pictures and post
them on Facebook or Instagram. There are people who are
coming to visit Tyler with the sole purpose of coming to take
their pictures in front of the wings. Nothing brings as much joy
to artists as seeing their work appreciated by so many people.”